The galaxy can change in a single instant. The destruction of Alderaan announced to the galaxy that the dreaded Death Star was fully operational and that the Empire was in complete control. In the same way, the Rebels’ swift destruction of this terrible weapon brought a spark of hope to the disenfranchised and signaled a changing tide. These covert missions are undertaken by some of the most iconic characters in the galaxy and can change the balance of the Force.

Covert Missions expands on the themes of the Convergence Block by continuing to place an emphasis on sub-types, downgrades, and plots! In this set, look for a new keyword, iconic characters, and two new plots that provide an alternate victory condition. 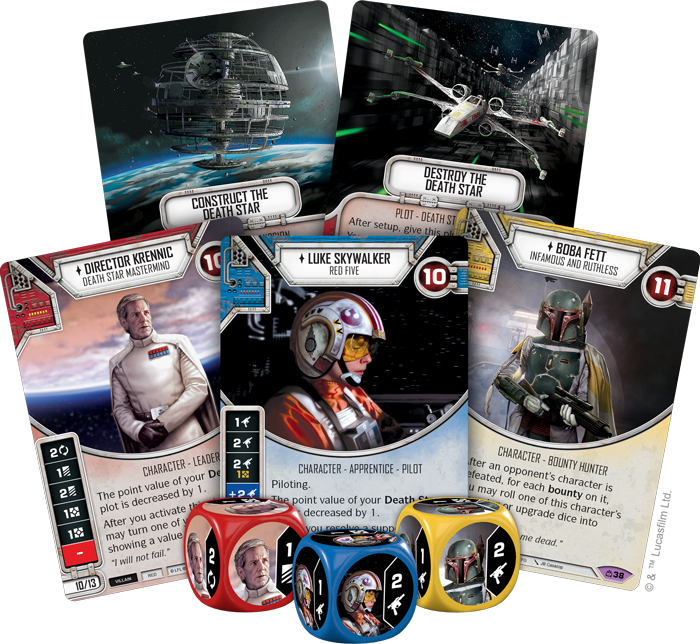 No weapon is more feared across the galaxy than the dreaded Death Star. Completion of the project nearly solidified the Empire’s control on the galaxy, only to be thwarted by a covert mission to exploit a weakness in the system and destroy the weapon for good. Now, the Death Star can be the focal point of victory and defeat in Star Wars: Destiny! Villains are tasked with the covert mission to Construct the Death Star (Covert Missions, 30), a monumental task that requires a massive amount of resources. However, if they can consistently remove their own dice showing resources, they can wipe the Rebel Alliance from the face of the galaxy once and for all.

Heroes, on the other hand, are tasked with a mission to Destroy the Death Star (Covert Missions, 81). It will take a crack team of Pilots and Vehicles to get the job done. However, if your pilots can chip away at the massive behemoth, and if you can make a successful Trench Run (Covert Missions, 80) and Trust Your Feelings (Covert Missions, 63) along the way, the Rebel Alliance may just pull off a miracle.